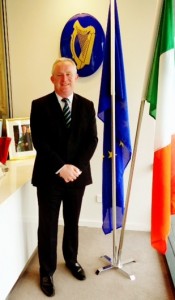 The Embassy of Ireland is pleased to announce the appointment by the Tánaiste and Minister for Foreign Affairs Mr Eamon Gilmore T.D., of Mr Martin Kavanagh as Ireland’s Honorary Consul in Western Australia.

Martin Kavanagh is originally from Cork and is a prominent member of the Irish community in Perth. He is closely involved in the work
of several Irish organisationsand recently helped to set up the Ireland – Western Australia Forum to promote business, professional and cultural links between Ireland and WA.
View Press Release.